The key question is why agriculture labour productivity is not only low but also stagnant. It is unlikely that it is the lack of productivity-enhancing factors such as land, water, technical know-how etc. that has led to lower labour productivity in agriculture. The problem seems to lie in the pricing of agricultural products. The aggregate output or value added is obtained using prevailing prices and then deflated to obtain the constant price output or value added. In value terms, the standard labour productivity measure is nothing but an alternative measure of the per-capita income of agricultural workers (Abeysinghe, 2020). Low and stagnant labour productivity, therefore, means that the incomes of farmers and other agricultural workers are lower than that of industrial and service sector workers. A small farmer holding one acre of rice field may earn, based on current paddy prices, Rs 40,000 to Rs 50,000 a month. This is conditional on both Yala and Maha seasons working well for him. This can be compared to a bank officer who may earn a guaranteed monthly income of Rs 100,000. The low and uncertain incomes of small farmers are of course well known.

A concerted effort is needed to uplift the income levels of agricultural workers. Subsidies and price support schemes are not sustainable. One area to consider is the role of the middleman in agriculture. Often there is a substantial difference in the price a farmer gets and the price at which the product is sold in urban areas. Anecdotally we can notice a vast difference in income levels of atomistic farmers and monopolistic middlemen in agriculture. This is where a well-designed government program is needed to remove the middleman so that farmers could get their products directly to the final destinations and receive a higher price. A well-designed program should include ways to minimize government inefficiencies. One way to minimize inefficiency, as practiced in Singapore, is to include a performance-based earnings component in the salaries of government employees.  Another area to consider is the export orientation of agriculture. Export-oriented agricultural products may seek a higher price. In particular, in many countries including Sri Lanka, organic agricultural products are a lot more expensive than their non-organic counterparts. We will leave these as questions open for discussion. 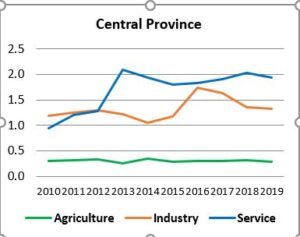 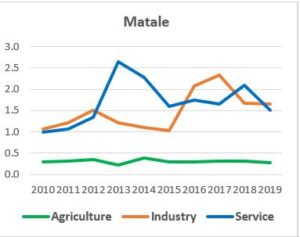 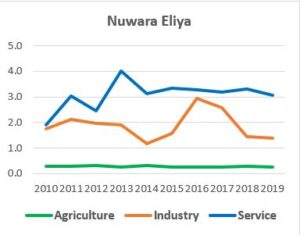